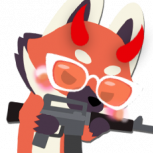 By Not Even A Fox,
April 1 in Community Development