What is Dungeon Defenders Going Rogue?

It’s a whole new roguelite experience built out of Dungeon Defenders Awakened. You choose your hero to take on waves of enemies, creating unique and custom builds as you progress each time you play! 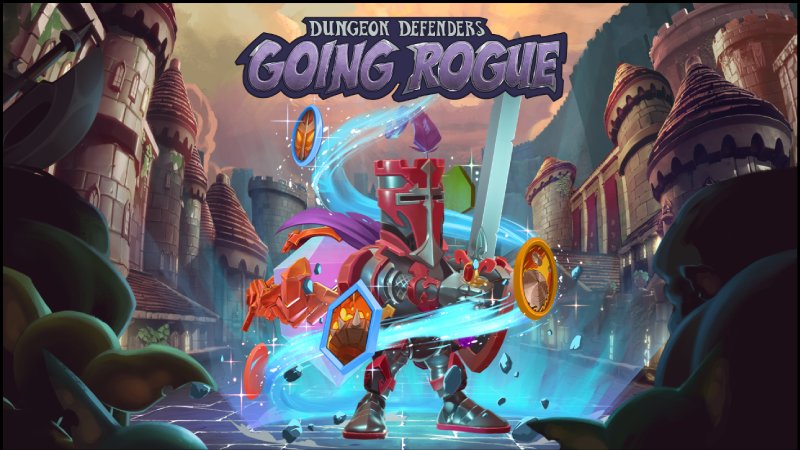 Play as the Squire, Huntress, Apprentice, or Monk, acquiring powerful weapons, defenses, and runes to take on the hordes that await. And don’t fret, there’s more heroes coming! 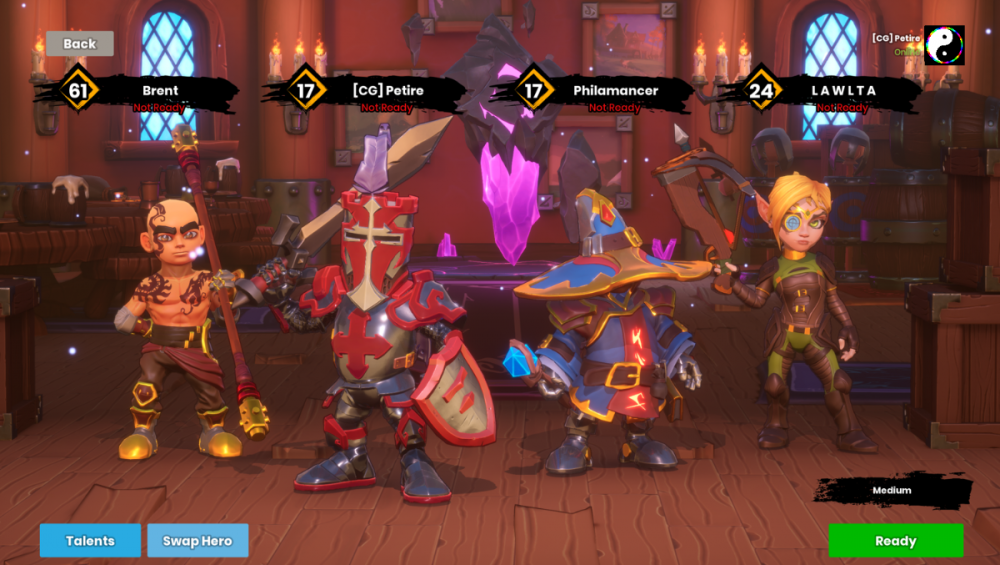 As you play, you’ll earn XP that you can apply to the talent system. This same XP is also applied to the Hero Mastery system and unlocks permanent attributes and runes on the specific hero that you’ve progressed! 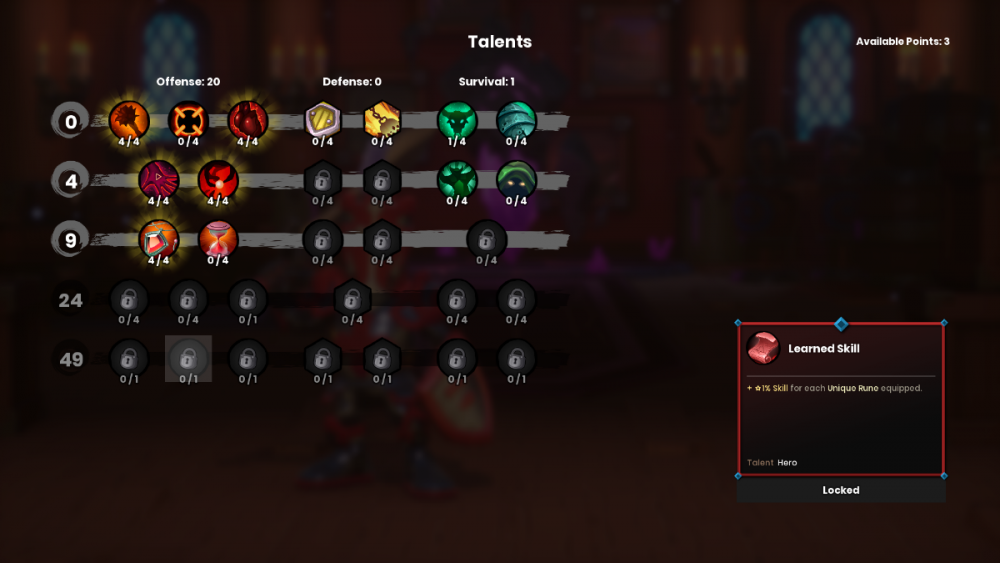 As you level up, defeat bosses, and get faster and faster clear times, you’ll unlock weapons and runes to make your future runs even faster and further increase your power!

There is a ton to experience in Going Rouge! Claw your way through the waves of enemies that are coming for your core, and take down completely reimagined boss experiences! The fun doesn’t stop there, as you can invite up to three friends to experience 4-Player Online Co-op to take on the challenges that await!

While working on our second major update for Dungeon Defenders Awakened, we were making a roguelite game mode that had a fresh start to it every time you play. As we continued to build the mode out, we were having so much fun, but we ran into multiple limitations (no multiplayer, profile save issues, loot dropping issues, and more). We were in love with the game mode, and the only way to get around those issues was to make it exist in its own environment. So that’s what we did!

We’ve gone through and done everything we can to make sure that Going Rogue feels like a whole new experience, and justifies being its own standalone game. It’s quite literally Dungeon Defenders gameplay but going rogue. There’s a lot of opportunities to try things out that maybe don’t make sense in our other games. For instance: A speedrunning competition that is fair among all players. Which brings us to… 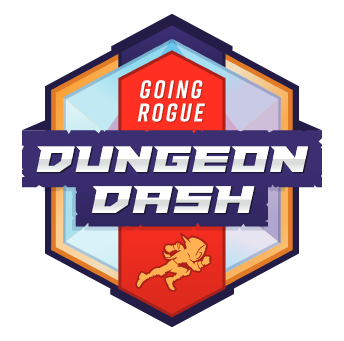 Starting now and continuing until April 3rd, we’re running a $10,000 Prize Pool Speedrunning Competition to celebrate our launch! We plan on having more structured contests as we continue to update the game, but for release we’re allowing things to be just a bit more chaotic. For more info, CLICK HERE!

Since Going Rogue is built out of DDA, we wanted to make sure we provided not only a fair price to purchase the game, but also something that rewards people for already owning DDA. That’s where the Dungeon Defenders Bundle comes in! If you own DDA, you’ll be able to purchase Going Rogue for a reduced price, and even better saving during our release sale. However, we’re also releasing with a sale, so purchasing Going Rogue through the bundle will be even less!

For our new Defenders that purchase Going Rogue, but do not own Dungeon Defenders Awakened, you’ll be able to pick DDA up for a reduced price as well through the Dungeon Defenders Bundle as well (and again, even cheaper when there is a sale going on).

This game allows us to continue to scale out the content we make for our other games that fits within Going Rogue. We’re releasing with the base four heroes, but we will be bringing in all of the Dungeon Defenders Awakened heroes over time. As we create more maps, heroes, enemies, and loot, we’re also able to bring these things into Going Rogue and mold them to fit within the gameplay. This helps us be as  efficient as possible during development and allows us to create unique experiences for as many Defenders as possible! 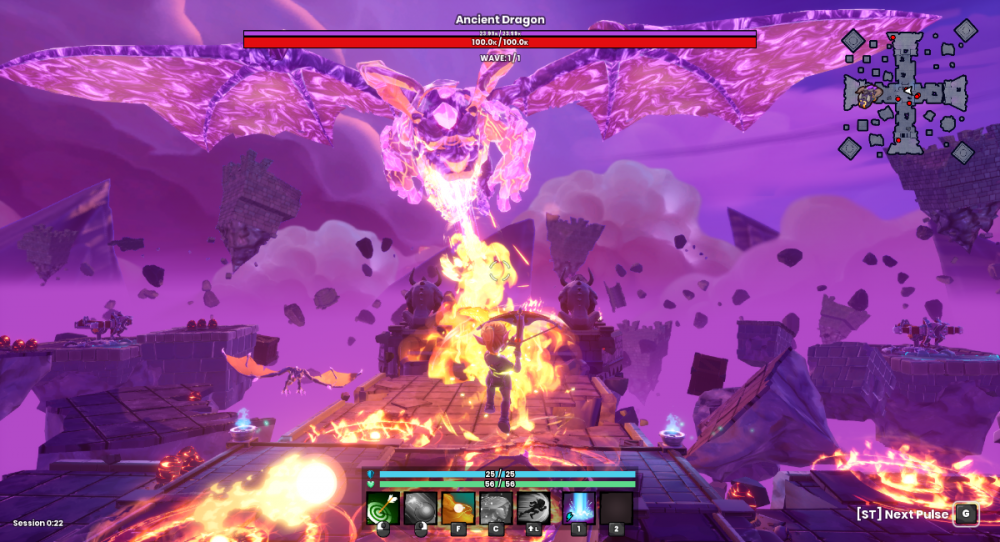 There’s quite a bit coming that we can talk about now, some sooner than others. Our current list includes:

Everything is fair game from our other games as well! We want our games to be a melting pot, where content can freely crossover where it makes sense.

Going Rogue is currently in Early Access on PC, meaning we’re getting a lot of balance and any major bugs sorted before going into a 1.0 launch. With the game using DDA as a base, we’ll be doing what we can to get the game out on all consoles that DDA is on. As we progress, we’ll keep you updated.

3 & 4 Player Enemy Visuals
There are currently some visual issues during 3 and 4 Player Online Co-op. Players 3 and 4 will see reduced enemy animations and some VFX may be missing. We’re working to fix these issues, but it is still playable.

Summary Screen
It’s functional, but it’s not pretty. We’re going to be getting this updated so that you have a more pleasant viewing experience of what you’re earning.

Party Bar and Player Lobbies
Sometimes it will show players in the wrong spot or not at all, this is purely visual. They are there as long as they show on their screen that they're in the lobby.

As you’ll notice in Dungeon Defenders Going Rogue, there’s an overlap in features with runes being very core to the gameplay. These runes serve as an example of what you’ll be seeing in Dungeon Defenders Awakened as well. We’re still working diligently on Episode 2 and didn’t want to leave our brave DDA players hanging without spoiling some new content. So we’re going to talk about something you’ll be getting for free right now, and also giving a sneak peak at our next hero!

First, the thing that you’ll be getting right away. In Dungeon Defenders Awakened, we will be providing the Going Rogue versions of the base four characters FOR FREE. We’ll be sending out an update later this week. All you’ll need to do is update your game once that update is out, and you will have them. That’s it. This is something we’re doing for ALL PLATFORMS. While Going Rogue won’t be on consoles right now, we want to make sure that all our Defenders are able to have fun with these new cosmetics! Getting the cosmetics onto consoles is going to be reliant on the certification process, so once they pass the individual platform certifications, we’ll have them out to you.

Second, we gave a very small tease on our next hero, which people had guessed, but we’ll announce it here as part of our Going Rogue celebration.

An exiled general from the armies of the Old One after questioning if war was the answer, The Outcast uses his crystalline arm to command forces to aid him on the battlefield. 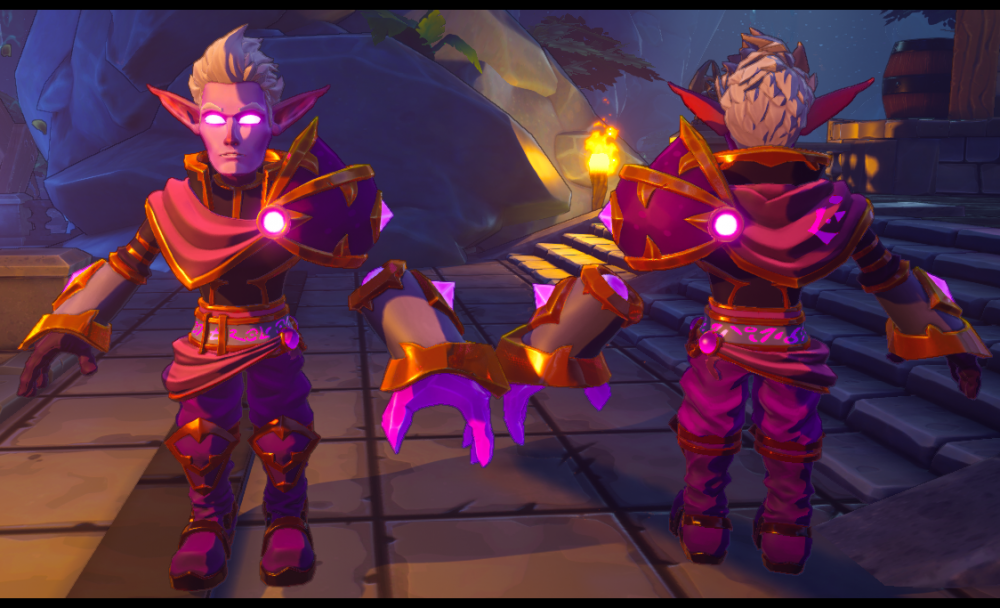 We’re not going into his kit just quite yet, but the Outcast will be the answer to what many fans have been asking for — a remake of The Summoner that fits within Dungeon Defenders Awakened. This is also another hero that we’ll be bringing into Going Rogue as well. We’re serious about making the most out of all the things we’re creating!

Oh you thought we were done? Not even close. We’re currently working on getting an update out for DD2 that includes new maps, a new enemy, a new boss, some new gear, which we’ll be talking about in the coming weeks. Past that we have some MAJOR things we’re going to be working on and getting your feedback, because we’ve got big plans and want our Defenders to be part of that process. We’re not going to talk about this much for right now, but stay tuned, big things are coming!