The Public Test Realm (PTR) is out now and there’s a lot for you to test (click here to find out how to get in). We’re going to be gathering feedback on and updating based on that feedback as we go! You may notice there is more in this update than what we have already announced (and we plan on adding even more as we get closer to launch), so we will frequently be adding to this list in order to get your feedback on additional elements and changes.

This is a PTR build. That means that things are going to be in a rough state, not finished, maybe a bit buggy, etc. It’s by no means a perfect representation of the game, or final in any means. Please take this into consideration when providing feedback. We’ve spent a lot of time working hard on getting this massive update going. We ask that you be respectful when providing feedback and understand that actual people put a lot of time and effort into everything you’re testing.

Through the escape menu, there is a link to a survey. You can fill this survey out and edit it over the course of the PTR.

For your time spent testing the PTR (we ask at least 30 minutes if possible) and filling out our survey, you will earn a brand new reward, Tester’s Eagle Wings: 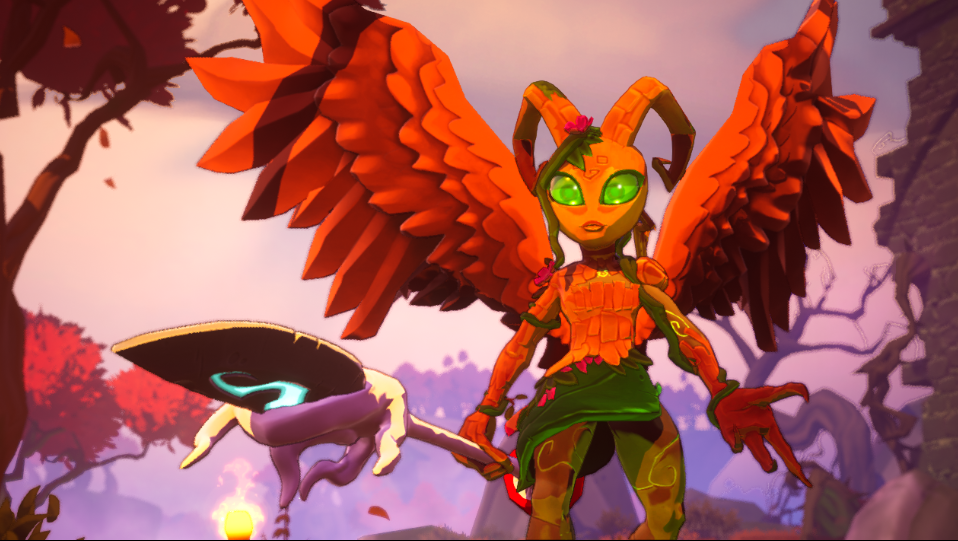 We are able to track your account, so don’t worry about adding any identifying information, we’ll get the reward automatically unlocked on your account when Episode 1 launches. To ensure it gets unlocked, there is a question on the survey that has your “PlayFab ID” (this is what we use for cloud storage and account saving). Do not edit whatever is in that field, otherwise the rewards will not be able to be applied to your account.

In future PTR tests, we will have additional rewards for your time. We really appreciate your feedback and constructive criticism, and our goal is to give something back. :)

Before we get into everything else, we want to talk about Defense Rate changes. Through our development with the Switch, and throughout our certification process, our game was not able to perform with the speed at which towers were attacking, effectively making releasing on the Switch impossible (due to how towers calculate enemy positions, priorities, tons of AI tracking, VFX being played, damage calculations, etc.) because of how many resources they took to make those processes work. As a result, we’ve provided a cap for Defense Rate that caps most towers at 0.50 shots a second.

This brings in Defense Rate overflow. Basically what this means is when you pump Defense Rate into a tower, that stat is rolled over into Defense Power instead. This means that while some towers will be attacking slower than before, they will be hitting harder to compensate for the Defense Rate cap (so the stat is not wasted). This includes any Defense Rate increase that you would get from boosting a tower using Overcharge or Speedy Gemstone for example.

We had to act pretty fast on this to ensure we can release it on Nintendo Switch. We discussed having two different versions (a Switch version with the lowered rates), but that just isn’t possible for us to maintain with a team of our size. Balancing it and making it fair would be impossible, and there might be metas where playing certain content on one platform may be easier than others, which is something we want to avoid entirely.

We’re looking to get as much feedback as possible here to make sure this change feels good while allowing us to fulfill our promise of releasing on Nintendo Switch.

The Rogue and The Warden are now available for testing!

The Mill, The Outpost, The Keep, and Foundries and Forges are all available for testing!

Our new system dubbed “Item Effects” have been added to gear (lower level pieces do not contain them) and are available for testing!

New Set Bonuses have been added to gear and are available for testing!

Test of the Demon, Mech, and Ancient have been added in a new game mode called Tests and are all available for testing!

In Nightmare and Massacre Survival, Bonus Waves are now available for testing (unlocked after beating Wave 25 Survival of each difficulty on Alchemical Labs, Throne Room, The Summit, and The Keep)!

The Act IV boss, The Lycan King, is not available for testing at this time.

Selecting Rifted and playing the new Act IV maps will have Rift Portals appear and is now available for testing!

Rifted enemy schedules have been changed to not include non-Rifted enemies and are available for testing!

The level cap has been increased to 105 and is now available for testing!

Wings have been added to the game and are now available for testing! (you must complete one of the Boss Test maps)

Offhands have been added to drop tables and are now available for testing!

The Hero Deck size has been increased to six, as well as providing additional bonuses for heroes in the hero deck. This is now available for testing!

Critical chance and critical bonus have been added to swords and polearms and are now available for testing!

The Huntress’s secondary is a grenade toss, and the Monk’s secondary now scales off level instead of weapon. Both are now available for testing!

Ammo and reloading have been removed from the game and replaced with an exploding secondary on crossbows (you can rocket jump with it). This is now available for testing!

Projectile speed has been adjusted across the game and is now available for testing!

These speeds have been adjusted across the game and are now available for testing!

All pets have been updated, except “Giraffe on a Treadmill” and “Mista Mine” (these will get updated in a later PTR patch).

We’ll be updating the PTR based on feedback and bug fixes. Meanwhile we’re also still working on Nintendo Switch certification, as well as a DD2 update. We’re plenty busy at Chromatic, and are super excited to share with you this newest update coming to DDA!