So far we've given you quite a bit of insight into how our levels are developed visually from start to finish. There is, however, one final element that greatly contributes to the atmosphere of our beautiful maps: audio. Once our level designers have finished building and scripting a map, and our VFX artists have gone through to make sure everything is appropriately shiny, it's finally time to implement sound.

When a map is ready for sound, my first step is to generate an audio asset list for our talented sound designer, Afshin Toufighian. It is during this process that I decide which environment pieces and effects will require an audio element and which areas of the map will require their own stereo ambient sound waves.

Unlike mono sound waves, stereo sound waves utilize both your left and right speakers to create one sound, and as such are not spatialized. This means that they don't seem to come from any one direction in particular, which makes them useful for establishing an ambient backdrop to a given area. Most indoor maps like Siphon Site D only require one stereo sound spanning the entire level. In contrast, outdoor maps like Nimbus Reach can have a variety of environmental settings that each require their own stereo sound.

After the stereo sounds are in place, it's time to start adding in mono sounds for singular environment details. Mono sound waves only utilize one speaker channel, so I set them to be spatialized. This means a player standing near the sound will hear it travel from speaker to speaker as the they turn their camera and experience a direct audible link to where the sound is coming from. In Nimbus Reach, I've implemented mono sounds for things like rustling grass, glowing plants, and single crickets chirping throughout the level. 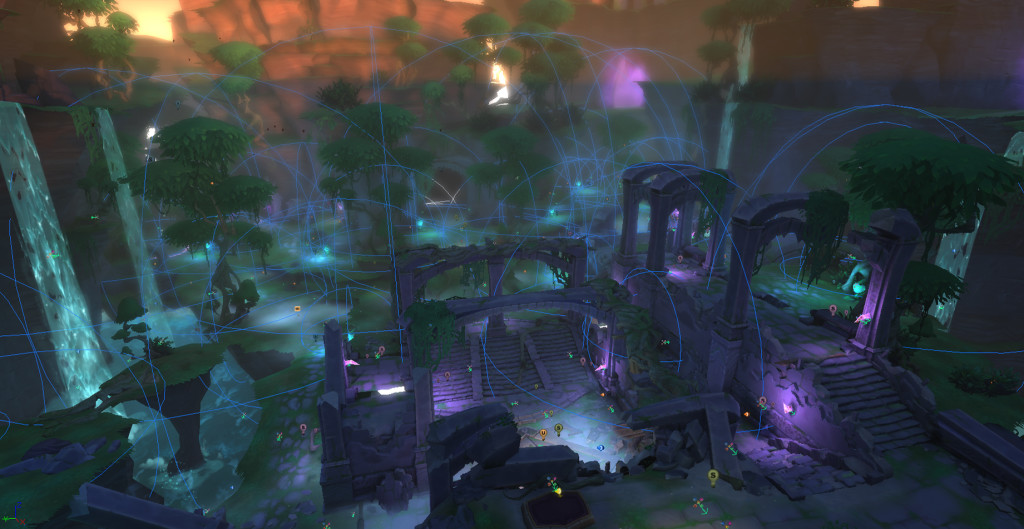 All my single crickets, chirp your hands up.

When used together, mono and stereo sound waves can create a complete and convincing soundscape for the player to experience. For example, while the water areas in Nimbus Reach do have a stereo water sound encompassing them, each individual waterfall also has a mono sound associated with it as well. These mono sounds communicate to the player's ears that each waterfall is indeed making its own sound, while the stereo sound communicates the reverberations of water sounds a player should expect to hear that close to the base of a few waterfalls. To put it simply, the stereo sounds function as my broad brushes, while the mono sounds function as my detail brushes.

The finished product can look a little messy... 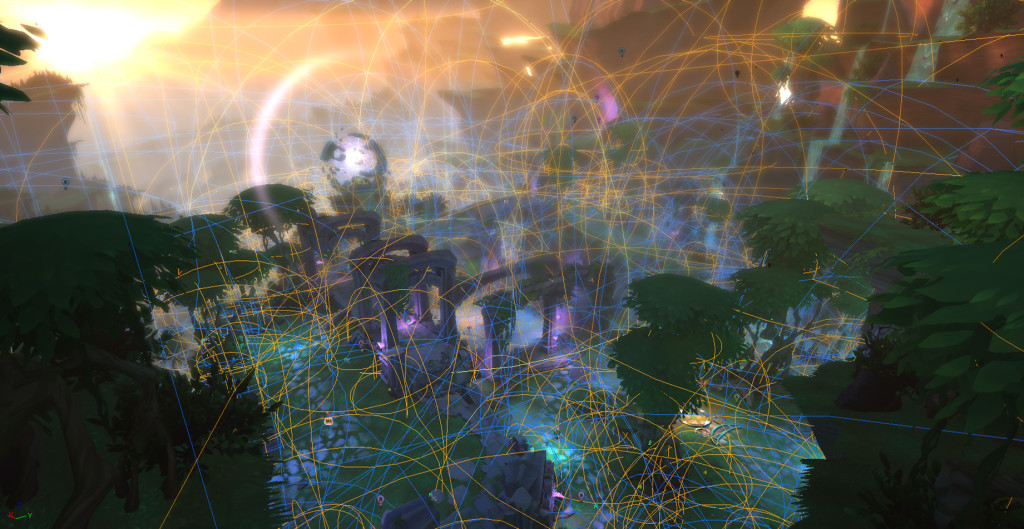 ...but we think it sounds pretty good. You don't have to take our word for it though. Check out the video at the top of the post for a tour through Nimbus Reach and hear for yourself!

The random winners of our previous blogs are:

What did you think of the ambient sound process? Tell us in the comments below, and you could win a pre-alpha code for Dungeon Defenders II! You have a full week to leave a comment. We’ll pick TWO random posters and reveal the winners next week. Don’t have a forum account? It takes less than a minute to join the community!