Before any of the lush environments, gnarly villains and dashing heroes step into the third dimension, we need to make them look like something -- preferably something cool! So how do we create concepts for new additions to the game? I figured we could go back to one of our recently revealed enemies, the Javelin Thrower, and see what it took for this abomination to come into fruition. (I also want to use this blog post as an excuse to melt your eyes with tons of art.) 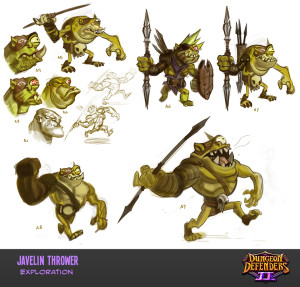 So where do we start? Usually there is a to-do list for each development milestone for things that need art -- animation poses, VFX, environment paintovers, and weapons to name a few -- but my favorites are the enemy concepts. Usually we work on those that need priority first, but most often we pick the fun things! So when we first start, we need to know the enemy’s role in the game. At this stage, a design document has already been approved by the higher-ups with the information we need. Below is just a brief excerpt from the Javelin Thrower’s doc:


Makes sense. After we have a clear grasp of what our goal with this guy is, we start gathering reference and spend some time thinking of our design goals. Our main job as concept artists is to solve visual problems, so in this instance we ask ourselves a few questions: What would a heavy ranged enemy look like? How do you throw a javelin? Is he intimidating, or can we inject humor? At this point my mind is already brewing with endless possibilities. I start going through the list of ideas in my head, exploring different shapes and personalities while still keeping in mind the design goals.

Our initial goal is to generate enough ideas and concepts to get people talking. Sometimes we hit the nail right on the head, and the first concept we make is the one that everyone likes. We celebrate, shake hands, and party. Unfortunately, this is not one of those times. After we’ve exhausted our brain and poured our initial concepts onto digital paper, we usually gather with our Creative Director Daniel Araya, our Art Director Rusty Drake, and the rest of our art team, and pitch ideas back and forth until we are clear on what the game needs.

One of the great things about games is the amalgamation of so many talented folks coming together to illustrate a single idea. Oftentimes, if done really really well, you know what that idea is by glancing at it, without guessing or having someone explain it to you.

With the Javelin Thrower, we really wanted that to be apparent. We wanted the player to have a sense of what this character was just by looking at him. Hopefully we did our job right. In the initial concepts, everyone really latched on to the idea that his throwing arm is all he uses, so it’s ripped and huge! If this guy throws something at you, it will obliterate anything in its path. We wanted that to be the focus, so he is extremely out of shape, disfigured and malnourished in certain parts. He has basically neglected everything else… but that arm, though. 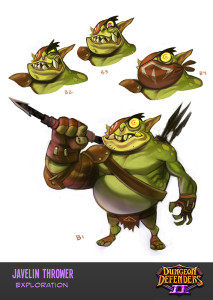 We are getting close! So at this stage, we couldn’t decide what to go with exactly in terms of personality. Should he be angry like the Orcs? Alarmed? Mysterious? Perplexed?

Ultimately, we agreed to have him be a little more fun and show more personality than his angry and intimidating Orc counterpart. B3 (see illustration above) was definitely the way to go. He seems super excited to get into the map and just throw things with wreckless abandon. 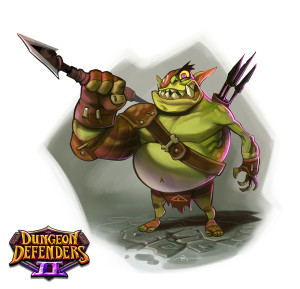 So there he is: the Javelin Thrower! He is perfect, the kind of enemy Etheria deserves -- except we are not quite done yet.

So here is the part where we take the design and break it only to mold it again into perfection. Most enemies in Dungeon Defenders II have tiers, which means this guy goes from tough to tougher to ridiculous. Visually, one of the things we really care about when it comes to tiers is the character’s silhouette. Will you be able to tell this guy apart from the others? If so, how much will his silhouette change when he is in a higher tier? Is he still visually interesting, or is it boring?

Normally enemies need to look more aggressive and intimidating. With the Javelin Thrower, it needed to be that plus we had to maintain his essential dorkiness. There is a lot of back and forth in this stage. We move things around, try a lot of different shapes, armors, colors, and horns, lots of horns, until ultimately… 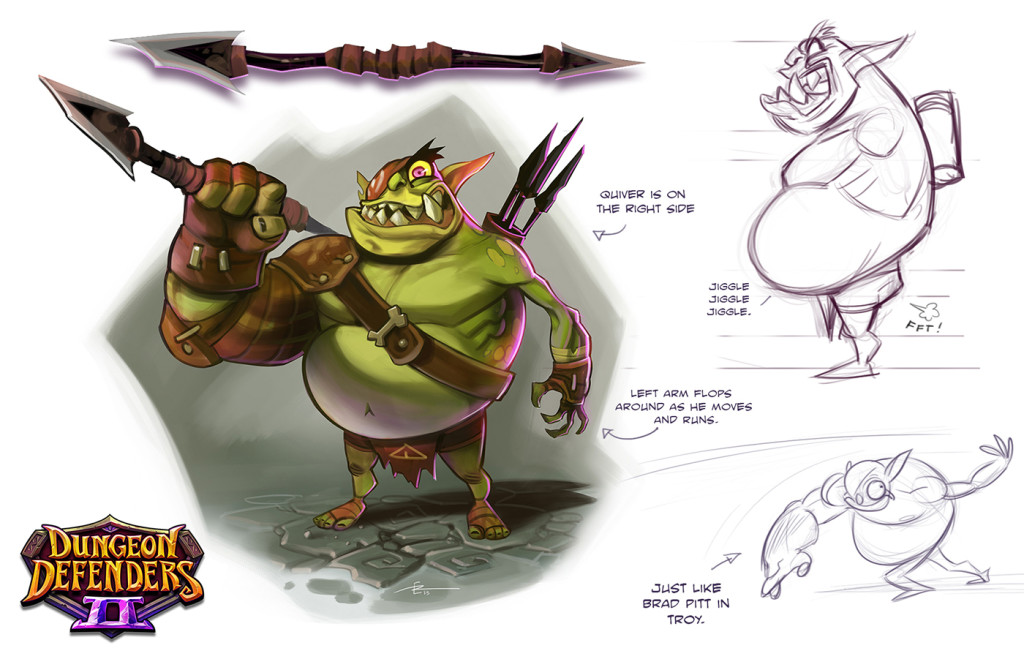 Bear with me here! We have a bit more time just before our deadline. Now after the design and the tiers have been approved, we need to make sure that all of our ideas are clear for everyone to be on the same page. We make a call out sheet to go over a few details and ideas we might have missed to make the 3D modelers and animators’ lives easier.

Now this little guy is ready to step into... 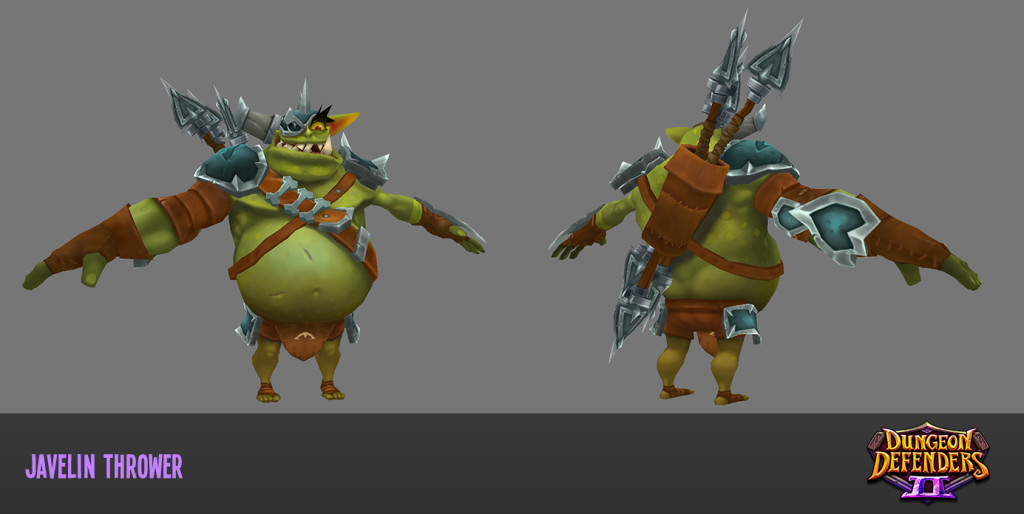 Our buddy Dan Pingston made sure of that, and he turned out very presentable, wouldn’t you agree? After this comes rigging, animation, materials, and finally those ones and zeroes can run through their veins. We have a ton of cool things to show you, so until the next one! Cheers!

The random winners of our previous blogs are:


What did you think of the concept art process? Tell us in the comments below, and you could win a pre-alpha code for Dungeon Defenders II! You have a full week to leave a comment. We’ll pick a random poster and reveal the winner next Friday. Don’t have a forum account? It takes less than a minute to join the community!