Deciding how enemies spawn in each lane requires careful planning on the part of the level designer. Each of the three lanes -- ground, air, and the optional, sub-objective blocked lanes -- are balanced differently, and each designer has different balance goals depending on the map being created. Ultimately, though, the goal of all level designers is to provide a fun and challenging experience for the player. 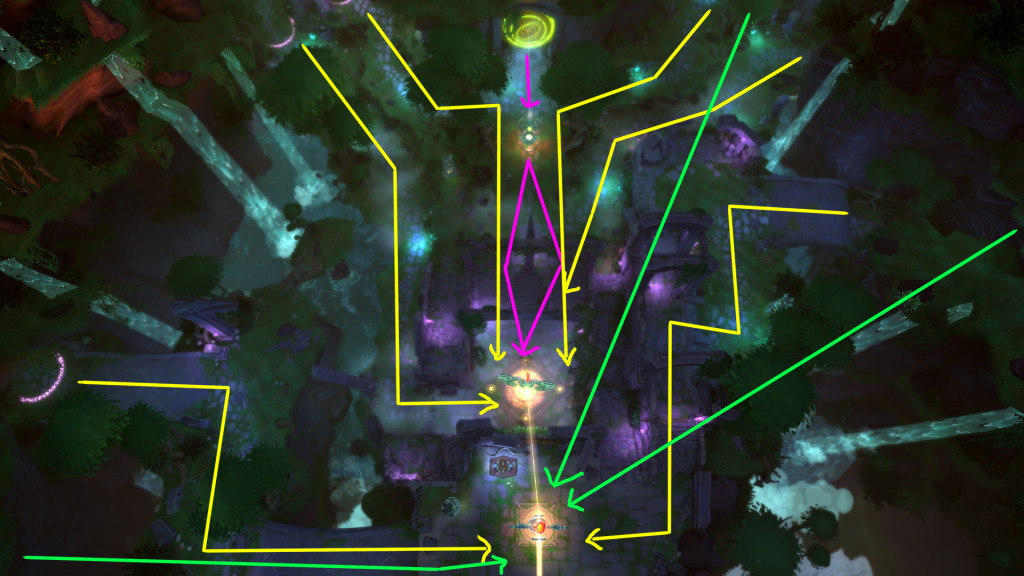 We want to avoid the need for players to build the same defensive structures in every lane, as we feel it robs them of any sense of choice or agency. Until recently, we had a limited selection of core enemies to use -- just the standard Orcs, Goblins, Kobolds, and other monsters from DD1. To promote as much spawn diversity as possible, every ground enemy was placed in every ground lane, creating situations where you knew you were going to have a certain mix of all enemy types in each lane.

But as more enemies become available for the design team to use, we can strategize the lanes differently. We might even be able to create specialized lanes, where only one enemy type spawns. For example, one lane on the map might be the "Kobold" lane for that particular match, and players would have to build accordingly.

When we balance a map, one of the first things we do is write a spawn schedule that determines when enemies spawn. Each designer has a different way of approaching the spawn schedules on a map. I personally prefer to create a plan that outlines where I want players to be during each wave. I try to make spawn layouts that will encourage players to move from location to location to react to threats on the map. For this to happen, each threat has to be spaced out. Once I have a good idea of where I want each player to be during a wave, I can plan them in a way that creates the movement I am hoping for. For example, I may start a wave with a heavy assault on the east side of the map, but then rotate the attack to the west side of the map near the end of the wave.

We write one schedule per wave, and of course we try to include some surprises along the way. We also try to ensure that each wave is progressively tougher than the previous. Additionally, we keep guidelines to ensure some level of consistency in difficulty across different maps, and to be sure that the challenge increases in a fairly obvious way. This set of guidelines is constantly evolving, but it helps us turn a complex balance system into methods with somewhat predictable results.

The next part of balance is deciding how much “pressure” should be exerted from each lane at any given time. Generally, I use five levels of pressure in a lane, from low to high. A “high pressure” spawn is intended to require the presence of two heroes, or a single player unleashing most of his abilities. When a high pressure group hits a lane, I expect the player to lose defenses if he doesn’t react. Obviously, high pressure groups are used sparingly, with anywhere between two to four appearing in a single combat wave, depending on the difficulty and length of the wave.

Another example are “skirmish” groups -- small groups that contain a limited number of light enemies that a reasonable defense setup should be able to take out. When a skirmish group is in a lane, I expect the player to be able to break away from the lane if a teammate needs help somewhere else.

These are just some of the methods I use to make enemy spawns as engaging as possible for players, so that every lane presents its own kind of challenge. Moving forward, what would you like to see from specialized lanes in maps? How would you adjust your strategy for a lane that spawned only Kobolds? Let us know in the comments and you could win a seat on the Defense Council!

Leave a comment to get your hands on the Dungeon Defenders II pre-alpha! You have a full week to leave a comment. We’ll pick a random poster and reveal the winner next Friday. Don’t have a forum account? It takes less than a minute to join!

Also, the random winner of our Elemental Weapons blog is going to be chosen on Tuesday, so there’s still time to enter!